Could Red Nail Polish Save Your Life?

A new safety campaign is reminding drivers across the nation to refrain from texting and driving. Known as the “Red Thumb Reminder”, the campaign began in August 2013 and is still going strong. Boulder, Colorado native Steve Babcock chose to paint his thumbnail red as a tangible reminder to avoid distractions while driving. Babcock’s late uncle had recently been a victim of an accident involving texting and driving, plus Babcock also wanted to set a good example for his nine-year old daughter. Could painting your fingernail red remind you to put down your cellphone–the answer is YES. And putting down the cellphone could truly save your life–and the lives of those you love.

Is Distracted Driving Getting Worse?

In our increasingly busy lives, we tend to do many things behind the wheel–other than driving. Cell phone use has made the problem considerably worse. One study found that talking on a cell phone while driving is about the same as driving with a blood alcohol level of 0.08%. There are three basic forms of distraction: cognitive, manual and visual. When you take your hands off the steering wheel, you are participating in manual distraction. When your eyes leave the road and the traffic around you, visual distraction is taking place. When you are daydreaming about what you will do on Saturday, you are engaging in cognitive distraction.

When you are using your cell phone–whether talking or texting–you are engaging in all three forms of distraction. The most typical forms of distracted driving consist of eating and drinking, cell phone use (both talking and texting), turning around to see what the children are doing in the back seat, reading a map, fiddling with the radio or GPS, grooming, talking to visitors, and watching what is happening on the side of the road. Drivers under the age of twenty have the highest incidence of distracted driving, although all ages are guilty of the habit.

Is Texting as Bad as We Think? 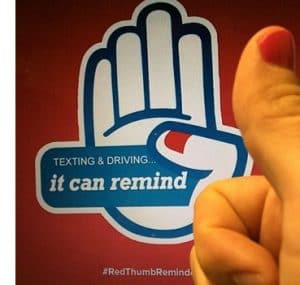 In fact, texting is not as bad as you thought–it’s even worse. When you are texting and driving, your risk of being in a crash increases twenty-three times. The average text takes 4.6 seconds–and that’s if you are really dexterous. In that amount of time, a car traveling 55 mph, will travel the length of a football field, and the driver would essentially be driving that distance with his or her eyes closed. The National Safety Council attributes twenty-five percent of all car accidents to texting and driving, and 1.6 million car accidents to distracted driving. Those figures may actually be higher, as few people will readily admit their accident was caused because they were engaging in a distraction. While many people have begun using headsets to talk while they drive, studies found that headset cell phone use is not significantly safer than hand-held use–apparently it’s the conversation that causes the distraction.

What is Florida Doing to Combat Distracted Driving?

The state of Florida has been relatively late to ban cellphone use–especially texting while driving. Anti-texting laws weren’t passed until late 2013. The Florida law, however, makes texting behind the wheel a secondary offense, meaning a driver may only be pulled over if they have engaged in another violation (such as speeding). In the months since the cell phone ban took effect, most police officers have found the law so challenging to administer that it is rarely used, with fewer than 1,800 tickets issued for texting since the law went into effect. When compared with, say, the 21,376 tickets given in Florida over the last year for improper backing, the results of the ban seem dismal, to say the least.

The state of Florida has also failed to require public schools to educate students about the dangers of distracted driving despite the fact that five Florida students died in the first six months of 2013 as a direct result of texting and driving. It seems that many Floridians could benefit from taking part in the Red Thumb Reminder as a method of decreasing accidents and saving lives.

Tags: Car Accident, Red Nail Polish, Text and Drive
We Must Win or You Pay Nothing!