Miami Dade's Most Dangerous Roads - Dante Law Firm, P.A.
Among being synonymous with heavy traffic, the Miami Dade area is also known for some of the most dangerous roads and highways in America. 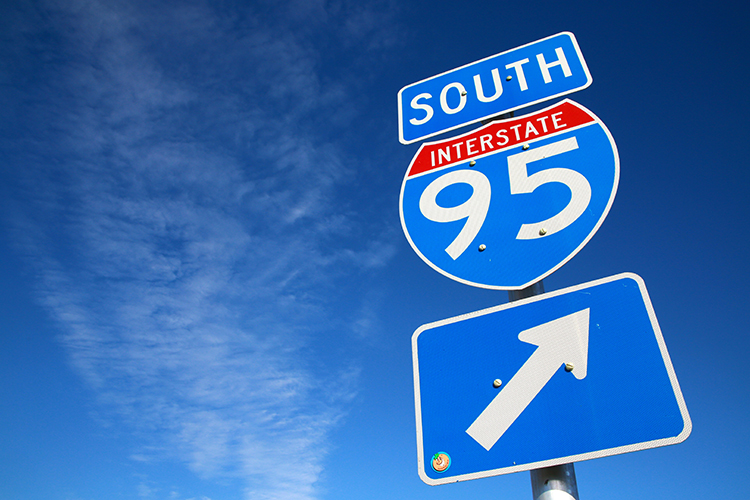 Florida is known for more than just Disneyland and oranges. In fact, Florida is home to some of the most dangerous roads in the United States.

4 of the top 5 deadliest roads in the country are located in Florida. Because of this, Florida has a much higher fatal crash rate than any other state.

What makes these roads so dangerous? It seems to be a combination of factors including the heavy volumes of traffic that navigate these roads as well as common human errors like distracted driving.

The more traffic on a road, the more likely an accident is to occur. Whether you’re a local to Miami Dade or you’re planning to visit, you need to know which roads to be aware of.

Keep reading to learn more about Miami’s most dangerous stretches of road.

Topping our list is Interstate 95, one of the most dangerous and deadly roads in South Florida.

This interstate runs north to south, for 382 miles, most of the length of the state. It ends in Miami.

This road is notorious for accidents, likely because of its heavy use by commuters every day. If you’re a local, you know you can always expect heavy traffic and delays when traveling this road in Miami Dade county.

Chances are, you always see a few accidents when you travel on this road.

There’s no doubt that I-95 is the most hated road in the area by Miamians themselves. In fact, the Miami portion of this highway is the deadliest stretch.

In 2015, there were 14 fatal crashes on the stretch, compared to 4,000 on all of the nation’s interstates. This gave Miami a fatal accident rate of 8 times the national average, according to the National Highway Traffic Safety Administration’s Fatal Accident Reporting System.

Tied for the deadliest road in Miami is US Route 1.

This road starts in Florida and runs all the way up to the country’s border with Canada. The road is 2,369 miles long and over 500 of those miles are located in the State of Florida.

The road changes names are you drive through the area. It first becomes the Dixie Highway, then changes to the South Dixie Highway. It eventually becomes Biscayne Boulevard.

While the road experiences a lot of changes as it goes through Miami, most of the accidents that happen are on the highway stretches, rather than the residential parts, making them even more deadly.

Over the past decade, this road has seen 1,011 fatal crashes that led to 1,079 deaths. Some consider it the most deadly road in Florida, if not the entire country.

State Road 826 is one of the most traveled roads in the State of Florida. More commuters lead to more accidents.

Most residents of the Miami area frequently travel this road because it connects Miami, Hialeah, and Miami Lakes. The most traveled section of the road is called the Palmetto Expressway.

Fatal accidents occur frequently along this stretch of road because of the heavy traffic. The road is receiving improvements in the form of new express lanes. The goal of the new construction is to improve traffic flow, which could reduce the occurrence of fatal accidents.

This road is also known as the Ronald Regan Turnpike and the (Homestead Extension of Florida’s Turnpike) HEFT.

This highway is known for being particularly dangerous for a few reasons. These include vacationers, fast drivers, and flying road debris.

Traffic has doubled on this road in recent years with more than 1.5 million motorists traveling the road each day.

There are a variety of safety initiatives taking place to reduce fatalities on this road from issues such as wrong-way drivers.

In Miami, the southern extension of the Turnpike plagues local drivers. While often seen as a less stressful alternative to Route 1 or I-95, the number of drivers and accidents disproves this theory.

This road is a local highway through much of Florida, making it less prone to most kinds of highway accidents.

In Miami Dade, the road is also called State Road 7. It also runs through Hialeah and Miami Gardens. It’s used mostly by locals and commuters.

What makes this road dangerous? As a local highway, it has traffic lights and intersections with additional roads. These make commuters more likely to be involved in T-bone crashes and other kinds of intersection accidents.

This road is also known as Bird Road. It connects the HEFT and Route 1.

This road is the only one on the list that is a local road and not an expressway or highway. However, it’s still almost as dangerous.

Bird Road runs through downtown Miami and is frequently traveled by local commuters. It’s a 13.7-mile main road that runs east to west.

Like US 441, many of the accidents that happen on this road are the result of intersections with other roads.

While it’s true that Miami Dade is home to some of the most dangerous roads, you can improve your chances of making it to your destination by driving safely and putting down your electronic devices.

Learning how to drive defensively can help you avoid accidents.

If you’ve been in an accident on one of these dangerous roads, you aren’t alone. You need an attorney on your side who specializes in auto accidents on Florida’s scariest roads. Your attorney will use their advanced knowledge of complicated Florida laws to get you the compensation you deserve.